“I am that cordless screwdriver that has to charge for twenty hours to earn ten minutes use.” (>>)

“I don’t know what we’ll call it, but it’s a big and hopeful and majestic Philadelphia Irish Rock ‘n’ Roll record. All embattled winners and fighters, hopeless romantics and monsters.” (>>)

“…the more you let somebody know who you really are[,] the more it feels as though something is at stake. And that makes me nervous. It takes me a million years to get to know anybody pretty well, and even then the slightest thing will set me off. I feel it in my chest, this desire to dissociate.” (>>)

“Itâ€™s about a kid who learns to not be ashamed of whom he is. In the beginning, he is ashamed of his faith. He feels that faith is socially and intellectually inferior so he wrestles with loving his community while still not wanting to be a part. When he goes off to Reed, he finds escape from that, but through a relationship with Penny, has to confront the reality that faith is larger and more encompassing than he had judged. And he has to face the fact that he is a poser and is as judgmental as those he would consider to be his enemies.” (>>)

Tonight, I bought a full-length mirror for the house. 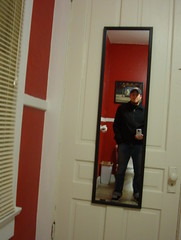 “kindness paves the way to repentance.” (>>)

My new laptop has a removable DVD drive, which is nice, but I’ll rarely–if ever–remove it and because it’s removable Windows puts the Safely Remove Hardware icon in the system tray, which is annoying to someone who is as nuerotic and anal-retentive as I am. If you search for a way to remove it most webpages will only give you bad workarounds (like hiding the icon itself instead of changing the device to be considered non-removable) or tell you it’s impossible to fix. But, I found a real solution in a usenet post and thought it’d be helpful to write out some clear instructions.

The driver for the device has a flag telling Windows that it is a ‘removable’ device, which gets loaded into the registry whenever the device is loaded. So, you basically just need to setup a way to automatically overwrite the registry value when the system boots.

First you’ll need to get the ID of the device you want to remove.

The next step is to modify the removable value in the registry.

At this point the device isn’t recognized as removable. It might take windows a moment to update the Safely Remove Hardware app, or you might have to open it up to refresh it, but the device is updated. The icon may stick around, but after the next step that will be taken care of.

The last step is to make sure that the value is automatically updated every time Windows boots (because the value is loaded from the device driver every time, so we have to overwrite it every time).

Now that .reg file containing the updated value will be loaded every time you log on to your account and (assuming it was the only removable device) the Safely Remove Hardware icon won’t show up anymore.

So say you’re feeling kind of sad and anxious, missing some girl or whatever, but you’re not totally depressed. You could go either way. It’s two in the fucking morning and you have to wake up in four hours, but you can’t sleep. Obviously you’re going to put on a record–or open up a playlist, you damn whippersnappers… but what do you choose?

You could listen to a sad song, something old and smooth and emotionally self-destructive, something by Otis Redding or Patsy Cline. That would be true to your feelings and comforting in a familiar but unhealthy way, like that bad relationship you kept going back to until your soul resembled Leonardo DiCaprio in the subway bathroom scene from Basketball Diaries.

Or, you could put on something new and fast and irrelevant, something with clever production and loud guitars. Something to numb your heart and distract your mind, like when Americans see pictures of genocide on the news and flip over to Desperate Housewives or ESPN. Motion City Soundtrack or maybe some Hot Hot Heat.

Because these choices are important. “Which came first, the music or the misery,” you know? Wallowing in beautifully harmonized self-pity starts to get a little pathetic by the time you reach your mid-twenties. But is it healthy to manipulate your feelings in order to be, well… healthy?

Maybe there’s a reason all those shallow preppy kids are so happy driving around in the BMW convertibles their parents buy them, listening to Britney Spears or N*Sync or whatever the hell the music industry is shitting out these days. But do you really want to live like that? I mean, those people acquire our contempt for good reason.

So, what do you do? Hunch down in the closet with Otis and a bottle of red, waiting for the voices to tire themselves out, or play Solitaire on your laptop with Britney until she bores the hell out of you and you can go back to sleep?

Or maybe you just make up a mix of both, sort it randomly and write something slightly neurotic for your blog.